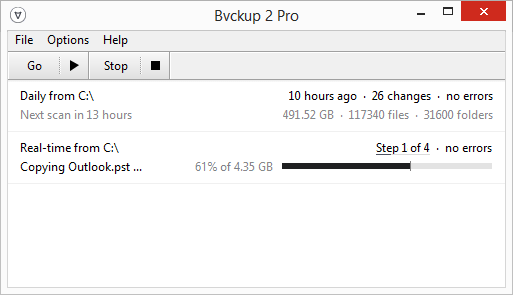 Light, versatile and very capable software for professional data replication. Select a pair of folders and it will make sure that one stays an exact copy of the other.
Download
Includes a 2-week trial

From massive data sets with millions of files and terabytes of data to small personal jobs Bvckup 2 easily accommodates replication tasks of all sizes.

The user interface is a first-class feature of the program. Light and eloquent, it is painstakingly designed to keep things simple and convenient.
Made in Switzerland

Features at a glance

Local storage devices of all major classes are supported - fixed, removable and emulated.

Their exact type and properties are detected automatically and used to adapt the copying pipeline for maximum performance.

Backups can be pinned to specific removable devices so that they will run only when these devices are present.

They can also be set to run on device arrival.

Remote storage devices accessible via the SMB protocol are supported just as well.

This includes anything from home routers with USB sticks to proper NAS devices to enterprise-grade storage filers.

Shares are automatically connected as soon as they become accessible. Shares going offline are also detected and handled accordingly.

With its ultra-low-overhead fully parallel data transfer the program can extract every bit of performance from participating devices.

Delta copying is a method of updating existing files that skips over any unmodified parts and copies over only blocks that actually change.

It helps dramatically cutting down processing time of very large, but slowly-changing files like VM images, encrypted file containers and even raw photos.

Files locked for exclusive use by other running programs can be copied using Windows native shadow copying service.

For file updates that are interrupted part-way through the program will automatically check the file on the next run, recover as much of its data as possible and continue the copying.

That is, file copying is resumable.

Source location can be monitored continuously and backups executed as soon as any changes are detected.

Backups can be organized to run one at a time or they can run in parallel with each other, just as soon as they are due.

Backups can also be set to run periodically, at fixed intervals. It's also possible to set them to not run during certain times.

Any backup can be run manually at any time. Simulated "dry" runs are also fully supported.
Scanning

File system volumes are tested to detect their capabilities and effective timestamp resolution.

Once the file index is compiled, it can be saved and reused on subsequent runs, eliminating the need for re-scanning the backup.

When building a list of files at a location, the program processes multiple folders at once.

This makes for a little miracle when scanning ultra fast local drives and remote shares over slow networks.

All file system operations are carried out using long path notation, which supports paths of up to 32,767 characters in length.
Planning

No action is taken until the program has a complete list of everything it plans to do.

The backup planner can recognize less obvious changes, such as renames and moves, for what they are and replicate them accordingly.

Backup copies of items that are deleted at source can be moved to a special folder and deleted from there after a grace period.

They can also be retained there indefinitely.

It's also possible to archive backup copies of files that are modified at source, effectively maintaining an archive of past file versions.
* Similar to the Safety Net feature of the Carbon Copy Cloner
Management

Run as a service

The program can be switched to run as a system service so that the backups would continue running even if no one is logged in.

Backups can be controlled and their status queried through the command line.

Detailed logs are maintained for all backups and the program itself, including full support for both size and age-based log rotation.

Email alerts can be dispatched upon backup's completion, including the run summary, logs or just a list of errors.

Custom commands of arbitrary nature can be executed before and after each backup run.

Bvckup 2 is written in a way and to the standards typically employed in development of low-level, embedded and system software.

It puts strong emphasis on using simple clean code, keeping resource usage in check and running as close to the hardware as possible.

Since its first release back in 2014 the program has been in a routine production use handling all kinds of jobs for thousands of our clients from more than 80 countries around the world.

Bvckup 2 ships as single executable with no dependencies on any external frameworks, third party components or system services (with an exception of shadow copying).

It can also run without full Admin privileges, though, of course, it can do more with them.

All program settings are stored in plaintext INI files in a single configuration folder that can be easily relocated if required.
See the complete list of features...

Each servicing a pair of
source and destination
directories

Details of all backup activity.
More on this below. 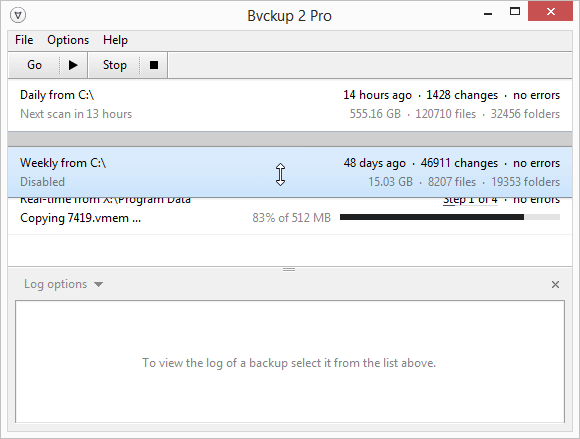 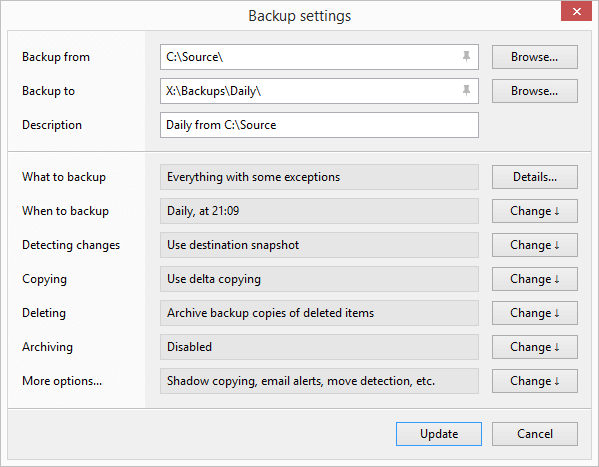 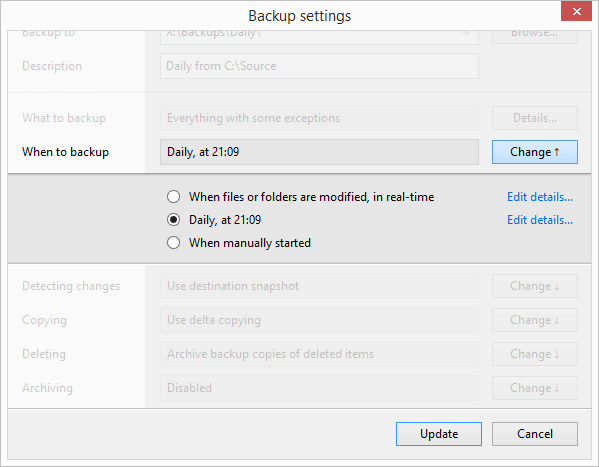 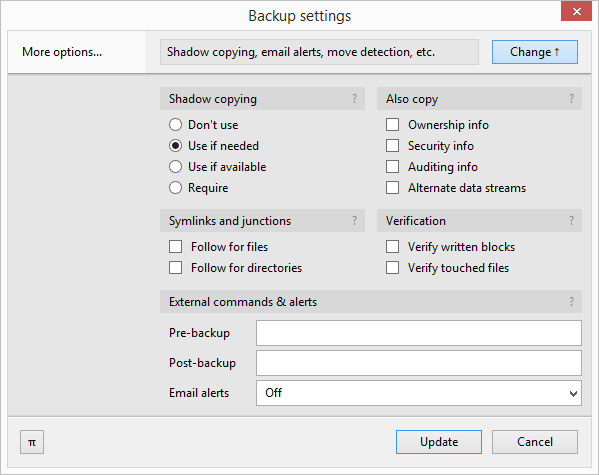 With over 80 variables covering all aspects of the program and backup state, configuration and operating environment. 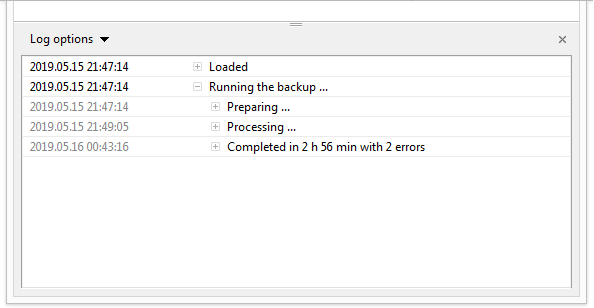 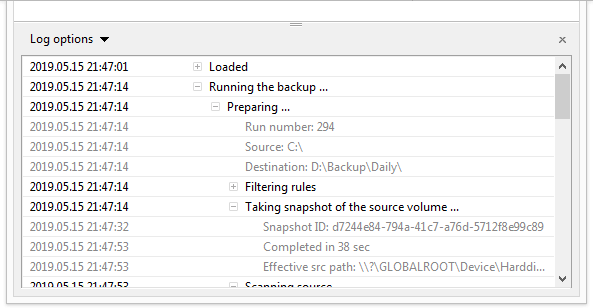 ... with all the details a click
away when you need them. 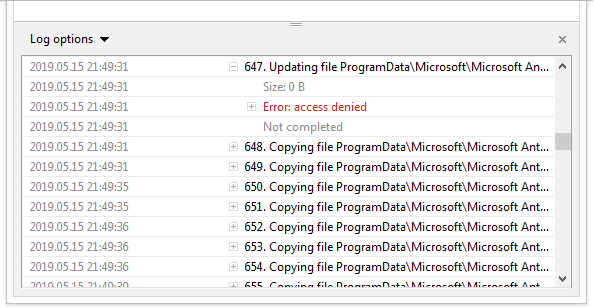 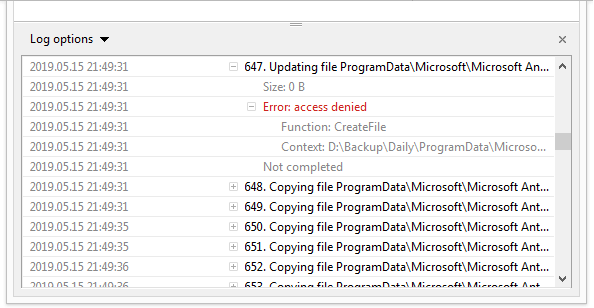 Error details are logged as well. In many cases a human-friendly explanation is also included. 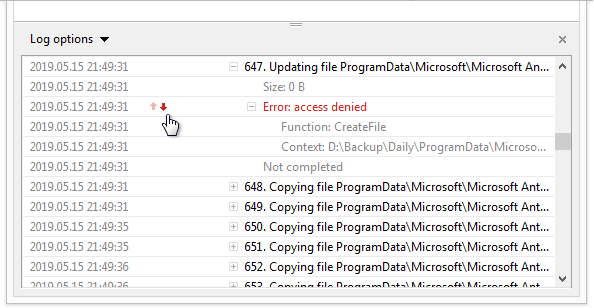 Hovering mouse cursor over an error line reveals a pair of arrows for quickly scrolling through all errors in the log. 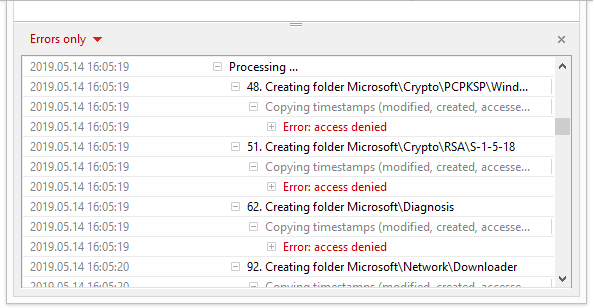 Alternatively, the errors-only view can quickly surface all errors in a simple and concise way.

Clean and expressive. A pleasure to use. How the UI looks and feels is just as important as how it functions.

Our development blog covers several years worth of screenshots, sketches and experiments. Some made it into production, others - didn't, but they all were instrumental to shaping Bvckup 2 into what it is today. Check it out here...

The pedal-to-the-metal mindset of a command-line tool with a beautifully functional graphical user interface. Erez Zukerman, PCWorld.com
One of the most usable backup tools ever. Not hiding what software does, but instead, showing the backup process in a way that makes sense. Anonymously, via in-app feedback
This is one of the best designed utilities I've used in nearly 30 years of being an IT professional. Simple, intuitive, powerful and just works every time. Well done, and thanks! Mark G., via in-app feedback
Amazing attention to detail and simply wonderful to use. One of the best windows apps I have ever used. Period. Mike B., via in-app feedback
Holy sh#t... just tried bvckup2 on the same directory. Went from 13 mins 29 secs to 1 min 9 secs to move the same data! Courtesy of /r/sysadmin
Read more...

Give it a try

Looking for the last beta?

Every once in a while we send out a short newsletter that covers new releases, planned features and related matters. We also use it to solicit opinions on new ideas and to recruit beta testers.

Get in touch - hello(@)iobureau(.)com
Made by IO Bureau in Switzerland
Support Forum
Email

In addition to the production version that is actively developed and supported, we made the last version from the beta testing cycle available for download.

The last beta requires no license, it is free to use, perpetually with no restrictions or time limits.